Mission Statement: Respect Life is a ministry that attempts to bring awareness within the parish to the clash between the culture of life and the culture of death.

Current Activities: A summary of the activities that Respect Life conducts on a yearly basis includes: The Rosary Crusade for Life; Pro-life flyers in bulletins; Life Chain in Beaufort; White Cross Display; An annual Rally for Life near the Thrift Shop; Stand Up for Life Rally in Columbia; March for Life in Washington DC; An annual Spiritual Adoption Program; and Prayer Vigils at Savannah Abortion Clinics. 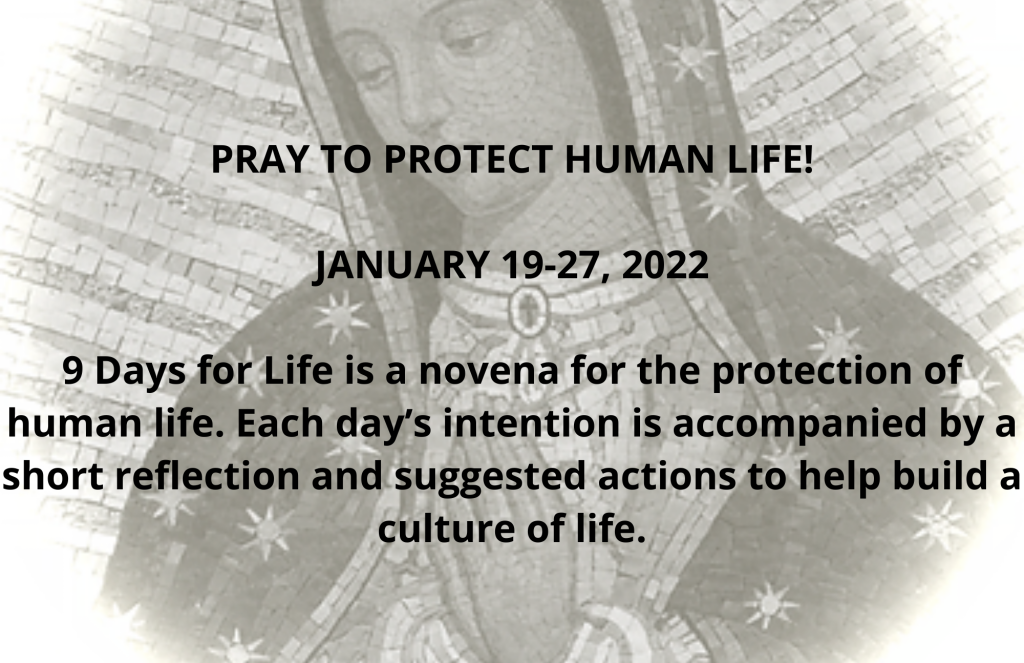 The National Prayer Vigil for life will take place on January 20-21, 2022, at the Basilica of the National Shrine of the Immaculate Conception in Washington, D. C.

Congress is moving forward on paying for abortion with your tax dollars! Babies and their moms urgently need your help.

The House Committee on Appropriations advanced bills last week that would essentially force taxpayer dollars to pay for abortions in D.C., through foreign assistance, and in federal employee health plans.

And this is just the start.

Easily send a quick, pre-written email by clicking the button below. Your members of Congress need to hear from you before they go any further.

The Hyde Amendment and similar laws have protected taxpayers from funding elective abortion for 45 years. Certain members of Congress want to take away these laws that Democrats and Republicans have supported for nearly half a century. Billions of taxpayer dollars could be used to pay for abortion.

It is critically important for Catholics to send a strong message before Congress moves forward to impose taxpayer-funded abortion.

Archbishop Salvatore J. Cordileone today published his first pastoral letter, “Before I Formed You in the Womb I Knew You: A Pastoral Letter on the Human Dignity of the Unborn, Holy Communion and Catholics in Public Life.” For text of the pastoral letter and a link to today’s homily, please ...

Sadly, Congress did not include the Hyde Amendment in its recently-approved  reconciliation package.  First adopted in 1977, the Hyde Amendment prevents the use of Federal funds to pay for abortions except in cases of rape, incest, or to save the life of the mother.  It is estimated to have saved more thatn two million innocent American lives.  For more Right to Life news, please click on this link.

And now, the good news:  The surgical abortion mill on 34th Street in Savannah - - the site of several 40 Days for Life prayer campaigns - - has closed its doors!  Praise God, and congratulations to the many faithful pro-lifers who spent hours outside the clinic offering life-saving help to pregnant women in need!

There are two parts to this update.  First, many thanks to the 125 people who attended our Rally for Life, and also to those who prayed for its peaceful success.  With adorable faces like these in our midst, surely we touched the hearts and minds of many passerby! 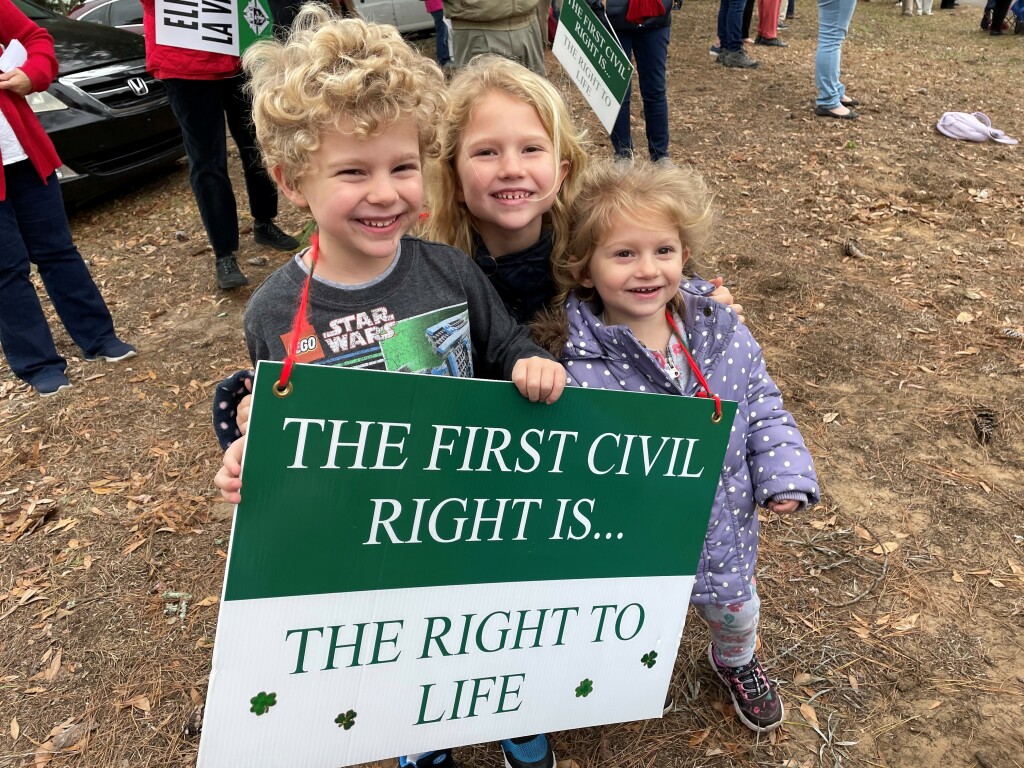 Friends, last week I mentioned that our three Lowcountry representatives -- Jeff Bradley, Bill Herbkersman, and Wes Newton -- voted in favor of the Fetal Heartbeat bill, advancing it from the S.C. House to Governor McMaster for his signature.  I neglected to mention that when this bill came before the Senate weeks before, our Senator Tom Davis also voted in favor.  Please thank these gentlemen for their pro-life votes next time you contact them.

Fyi, the February issue of South Carolina Living, the monthly magazine sent to all customers  by Palmetto Electric Cooperative, contains the 2021-2022 Legislative Directory containing names, photos, and contact info for our elected officials in Columbia and in Washington, D.C. Another helpful resource is our statehouse website: www.scstatehouse.gov , where you can find everything you need to know about what's happening in our state legislature, including the status and texts of bills, records of votes, and the S.C. Code of Laws.

Further north on Capitol Hill, the U.S. Senate is in the process of evaluating President Biden's nominees for various positions. One of the most powerful is secretary of Health and Human Services (HHS).

Biden's pick is Xavier Becerra, who should be opposed based on the following record as California Attorney General (quoted from The Loop by Catholic Vote, 2/18/21):

Xavier Becerra has a long record of open hostility to people of faith, and if confirmed, will serve as the abortion industry’s puppet.

In fact, Becerra has no formal education, training, or background in medicine or health care. Even liberal groups advising President Biden expressed shock at his nomination. His 'health care' experience mainly involves defending Obamacare and suing to protect abortion while trying to punish pro-life advocates.

Let’s face it, President Biden nominated a deeply unqualified man who has consistently used his office to pursue an extreme ideological agenda." The vote on Mr. Becerra's appointment is likely to take place early next week. Please contact our two U.S. Senators, Lindsey Graham and Tim Scott, to express your objection.

As always, thanks for all you do for life, seen and unseen.

If you have driven on I-95 or Highway 315 lately, you might have noticed a few eye-catching pro-life billboards offering free help to pregnant women.  These billboards are a life-saving outreach sponsored by VitaBella ("Beautifiul Life").

Each board features an 800 number to a national call center that answers 24 hours a day, and which refers local callers to the Pregnancy Center and Clinic of the Lowcountry or to the Savannah Care Center.   If you would like to learn more about this project or make a donation, call Catherine Koncul Russoniello at 843-816-3772.

More human beings died in abortions than any other cause of death in 2020, a new report indicates.

A heartbreaking reminder about the prevalence of abortion, statistics compiled by Worldometers indicate that there were over 42.6 million abortions world-wide in 2020.  For more information on Worldometers, please click on this link.

Good News for abortion survivors!  Remember how hard we all worked to pass the Born-Alive Abortion Survivors Protection Act, but the speaker of the House would not even allow it to come up for a vote?  Well, last week President Trump issued the Born Alive Executive Order that guaratees medical care for premature babies, babies born with disabilities and babies born alive following an abortion.  The order also increases federal funding for neonatal research.  Thank you for your steadfast prayers o behalf of these vulnerable people!

This year marks the 25th anniversary of St. John Paul II's "Letter to Women."  In it the Pope observed that women "acknowledge the person, because they see persons with their hearts.  They see them independently of various ideological or political systems.  They see others in their greatness and limitations; they try to go out to them and help them.  In this way, the basic plan of the Creator takes flesh in the history of humanity and there is constantly revealed . . . that beauty - not merely physical, but above all, spiritual - which God bestowed from the very beginning on all . . . " (12)

St. John Paul II, pray for us as we seek to heal our social ills by recognizing the dignity of every human being in word, deed, and law.

S.C. Statistics, Part Three: Last week we learned that 5,101 abortions took place in 2019, and that 57% were committed at Planned Parenthood clinics. This week's alarming fact is that 39% of the aborted babies were black, yet African-Americans comprise only 28% of our state population. Let us pray, work, and vote to end this insidious form of racism by upholding the first civil right: the right to life!  (Source: SCDHEC Dept. of Biostatistics)

"I would like now to say a special word to women who have had an abortion.  The Church is aware of the many factors which may have influenced your decision, and she does not doubt that in many cases it was a painful and even shattering decision.  The wound in your heart may not yet be healed . . . But do not give in to discouragement and do not lose hope . . . The Father of mercies is ready to give you his forgiveness and his peace in the Sacrament of Reconciliation."  (St. John Paul II, The Gospel of Life, Section 99) 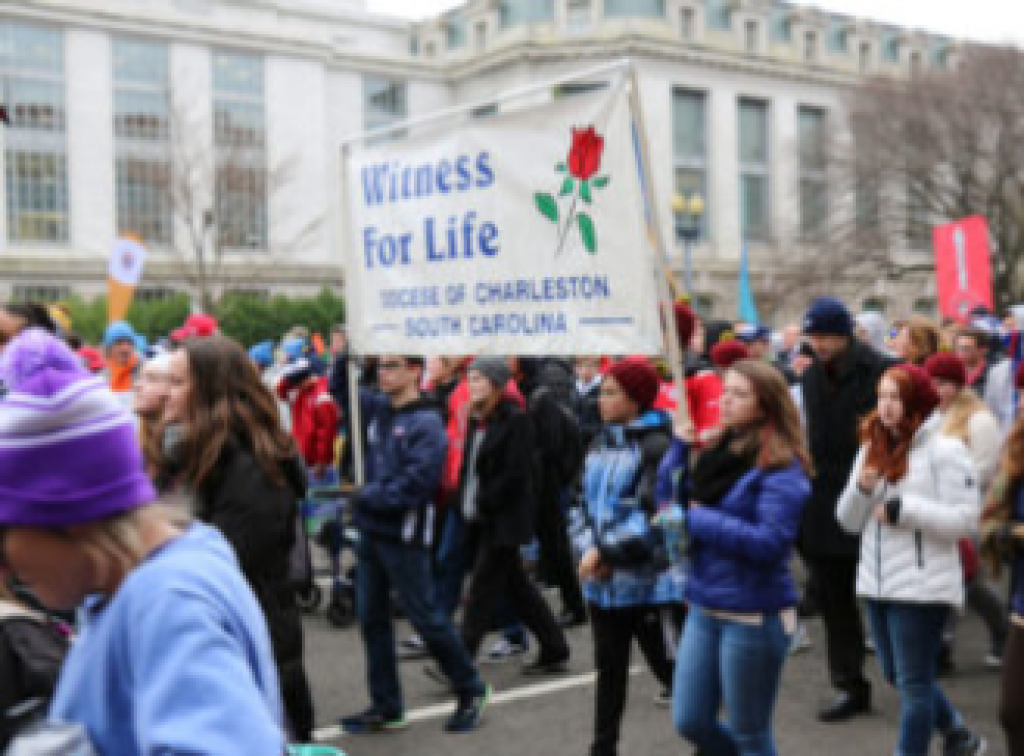 More than 700 people from the Diocese of Charleston attended the National March for Life on January 24th, where they made their presence felt with signs, vocal chants, and prayer. 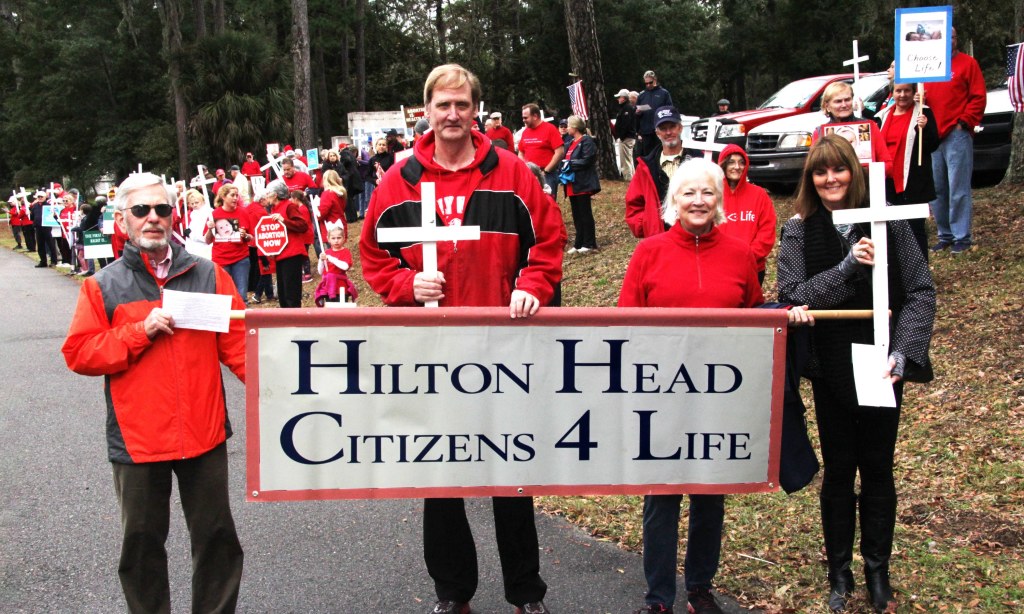 For more pictures of the Rally for Life, please click on the photo above.

Last week we rejoiced that the number of abortions reported in SC for 2018 declined to 4,646, the lowest number since 1975.   The majority of those abortions were divided between Planned Parenthood's two facilities in Charleston and Columbia. The rest were done at the Greenville Women's Clinic, a privately-owned business. Since even one baby's death is too many, we must continue to work in various ways to make abortion unnecessary, unprofitable, and unthinkable.

The St. Gianna Respect Life Ministry of St. Gregory the Great has a year-round prayerful presence at the Savannah abortion facility.

Vigil Location:  Outside Savannah Medical Clinic at 120 E. 34th Street (near the corner of Abercorn).

Prayers Needed:  Twins were recently saved from abortion at this location, but your prayers are critical for this ministry of love and hope.

We thank God for the results of 20 previous Days for Life campaigns worldwide:

Learn more and get involved by visiting our campaign. Please click this link for more information.

Current Volunteer Opportunities: Participants needed for all the above listed activities. For more detail on these activities see Respect Life Activity Detail.

Throughout the year, announcements in the Evangelization section of the parish bulletin encourage prayer, meditation and action.

As we welcome the restoration of many personal freedoms (and fireworks) to celebrate this Fourth of July, please also remember these historic words from our Declaration of Independence:

"We hold these truths to be self-evident, that all men are created equal, that they re endowed by their creator with certain unalienable right, that among these are Life, Liberty, and the pursuit of Happiness."

Note that "Life" comes first, because without it no other rights are possible.  Remember this, and teach it to your children: the first civil right is the right to life!

Jesus, Mary, Joseph, I love you very much.  I beg you to spare the life of the unborn baby I have spiritually adopted who is in danger of abortion.

Click here for: WHAT’S YOUR PART IN THE PRO-LIFE MOVEMENT?

Jesus, Mary, and Joseph, I love you very much.  I beg you to spare the life of the unborn baby I have spiritually adopted who is in danger of abortion.

Are You Still Working?

Your session will expire in 60 seconds.

Your session has expired

Your time to complete the form has expired due to inactivity. Please click the button below or refresh the page with your browser and try again.